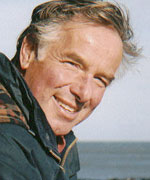 All my life I have been influenced by the powerful images art can produce. Some of my earliest memories are of dramatic, atmospheric illustrations from my childhood books, which filled me with excitement and sometimes fear.

I was brought up in an artistic environment, as my mother, Juliet Pannett MBE, was a professional portrait painter all her life and it was through her instruction and encouragement that I took up painting in the first place, though I never had any intention of a career in painting.

Sadly, she died in 2005 having painted two portraits of HM The Queen, nine Prime Ministers and leaving 21 portraits in the permanent collection of the National Portrait Gallery.

At school I was very stimulated by the work of Roy Nockolds (I still have a wartime postcard by him of a Hampden over moonlit water on the wall in my studio), Frank Wootton and Terence Cuneo in the “How to draw” series, and later by the wonderful pen and wash drawings by Edward Seago in “With the Allied Armies in Italy” which was the first art book I ever bought with my own pocket money.

I was educated at Uppingham school and after National Service in Cyprus and Libya in the Devon/Dorset Regiment, I joined the diamond company De Beers working in the UK , Belgium and Africa . Apart from having one painting of a Spitfire exhibited at The Society of Aviation Artists while still at school (This was painted using up my mother’s oils left over from a portrait and entered without my knowledge!), I took no serious interest in painting till when I was in my 30`s,when the whole family went on an art course at Walberswick with Edward Wesson and from then on I was inspired by his mastery of simplicity, tone and colour.

I started exhibiting in local galleries and the London Exhibitions and in 1975 was elected a member of the Guild of Aviation Artists followed in 1979 by being made an honorary freeman of the Painter Stainers Company. By 1982 I found I had more art work than I could cope with, so resigned from De Beers with whom I had been for 20 years and went full time into art. and in 1985 was invited to become a member of The Wapping Group of Artists and from 2009 – 2012 was their President. I was also made a Fellow of the Guild of Aviation Artists in 2012.

For almost 20 years my mother, aunt and I ran art courses in Sussex and enjoyed numerous overseas painting trips, even having two exhibitions in Hong Kong . Through painting I became good friends with Richard Binns (Website www.richard-binns.co.uk ) for whom I painted many of the illustrations for his guidebooks on France and the UK . I have also painted over 350 golfing paintings for the Rosemary Young Collection (Website www.rosemaryyoungcollection.co.uk) and paintings for The Temple Island Gallery Collection (Website www.templeisland.com)